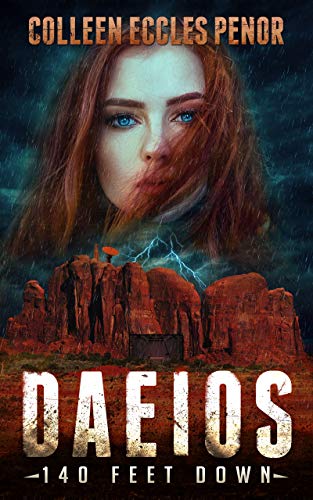 «DAEIOS: 140 FEET DOWN» is a dystopian fiction book written by Colleen Eccles Penor.

It’s the year 2034. The World is experiencing worse and worse cataclysms: lightning bolts hit more and more people, there are hurricane winds and storms with huge hail. The male population suffers from a genetic disease that kills many of them while they are young and negatively affects their chances of successfully fathering a child. This and the fact that the storms are getting stronger, make many people believe the apocalypse is imminent. They seek refuge, and one such refuge is Daeios – an underground facility, said to have enough food and water for hundreds of people for a year. And this story tells us how Shea, the main character, gets into Daeios with her family, and what happens while she’s in there.

Most of the story falls into the «middle» category. It’s not too dark, not too graphic, not too explicit. But where it’s warranted, the book really becomes full of violence, rape, death, blood, and misery. The story is told from the first-person and in the present tense, in case you have preferences.

Now. I always write about my conclusion for the lazy ones. Yet they are still my thoughts, so you can keep reading, regardless. Please keep in mind that what I liked may be insignificant to you. And what I disliked may be the only thing exciting for you.

So, the story is delightful. It’s dark where it needs to be. It’s heartwarming where it’s warranted. More or less every character is unique. The situations they find themselves in feel believable. The hardships they have to go through either strengthen them or weaken them, but they always make an impression. They have to use their brain and strength to overcome them. They aren’t perfect: they make mistakes; they get hurt; they fall in love. I felt joy reading a few funny moments. I felt tense while the book made me wander in total darkness. I wanted to unravel the mysteries. I made theories and was seeking to prove or disprove them. The final showdown made me tense and focus. I never knew what was going to happen. I was never sure who was going to live or die. I never guessed the final twist. Well, two of them.

But, and this is a very big "but," the ending of a story is crucial. It either fulfills the promise and delivers to us the resolution for the book, or falls short. It may fulfill our wishes or crush them brutally or subvert them. It may surprise us, leave us satisfied, or leave us on a cliffhanger.

With this book I felt disappointed with the ending. It was too long, too complex, too many people were involved, too many actions took place. The thrill of the climax wore off, leaving me reading and reading. The mood and the emotions of the characters were way off during the last lines. The author talked about concepts that I never believed in: the book never made me, never explained them in enough detail. Even the promise of punishing the bad guys was never delivered, for I see ways of how they can escape their fate.

The ending could not ruin the entire book. It’s still a very good read and an investing story. Yet I cannot give the book more than 4/5. I really want it to be 3.8/5 only because of the ending, but most platforms don’t let me input such a rating. I definitely recommend this book to anyone who’s not afraid of a story that can be, at times, very dark, painful, and graphic – you’re in for a delightful ride.

As I said previously, most characters are unique. They keep their traits throughout the book, yet Shea, the main character, and Helen, her mom, receive their arcs. Shea has enough emotions: she feels love, compassion, fear, repulsion. But she can also pup herself together and act rationally. She’s very close with her family, but not too much to her mother, Helen, who is cold and distant. Yet when I read it, I saw glimpses of emotions in Helen as well.

We learn that Shea’s brother, Jace, is a drug addict and that he’s missing, probably high. We learn that it is becoming increasingly common among males, who are terrified about the possibility of having the genetic disease I’ve talked about, called «Y Chromo.» If they have it, then they die a slow and painful death, without knowing when it happens. It poisons their everyday life, makes them feel helpless. All of it pushes many men to increasingly stronger distractions, like drugs.

Shea doesn’t want to go to Daeios, she’d rather quickly die on the surface while keeping her freedom than die from starvation locked up in Daeios a year later. She agreed to help find Jace, but then her family must leave without her.

The first scenes really had a sense of urgency. Not only one of the biggest storms yet was coming, not only Jace was lost and could hurt himself, but I also knew that the family had to get to Daeios in a matter of hours, or otherwise they would lose their chance. During the first scenes, the book got me familiar with Shea, showed how bloody and graphic it could be, showed the relationship between different members of the family, and showed glimpses of the upcoming apocalypse. All of it was nicely done and made me want to read further.

In the first chapter, Shea looks at a mirror and doesn’t like what she sees, who she sees. In the last chapter, Shea once again looks at herself and now she likes herself. She didn’t want children, but now she wants to give birth and raise the child conceived while she was raped. The journey changed her, and she wants to get as much from the change as possible. But it doesn’t mean that I like everything about the change. The love towards her unwanted, unborn child seems too sudden, undeserved. Maybe it can happen like this, I don’t know. But it doesn’t change the fact that it bothers me.

Chapter 3 tells us more about Earth’s recent history. Apparently, people of color have segregated from whites. And whites further segregated among themselves based on the presence of physical disabilities and even tattoos. There’s not only tension between the group, not only physical separation but even violent conflicts. The author tells us about this segregation and then forgets about it until the end of the book, where she made a point that this segregation should not exist.

And this is where Colleen fails completely. First of all, I never believed that segregation ever happened in the first place. It was never explained how such a complicated thing could have happened. What’s even more complicated and unbelievable is how whites managed to segregate among themselves. Secondly, Shea never cared about segregation. In fact, in Daeios she separated herself from the rest of the people. She was actually glad to not be like everybody else. During her adventure in the wasteland, she was constantly irritated and scared when feeling being watched, wishing to be left alone. Separated. These two points illustrate why the ending doesn’t work for me at all.

When the family reaches Daeios, Shea quickly realizes that everybody there seems brainwashed. They are no longer themselves. Their only desire is to please the Elders who run Daeios. A lot of the story is spent trying to discover how the brainwashing occurs, what is its purpose and why Shea and her mother are the only ones unaffected. And during this exploration, the book shows that it’s not afraid of making us explore the place in total darkness. And it does it masterfully, making me nervous and unsure Shea can succeed. Jace commits suicide and we are once again reminded that the book can show blood and gore in wonderful detail, not forgetting to mention that Jace shot himself with Shea’s gun, while holding it in the wrong hand.

And this is the time where Shea loses a sizeable amount of her compassion and feelings, never getting it back. Seeing the bloodbath shocks her, but for my taste, she recovers too quickly and doesn’t suffer strongly enough. Maybe she does, but the book doesn’t mention it well enough. This trend continues when Shea’s mom is killed right in front of her during the climax. Sure, during combat Shea can get a hold over herself. But the combat ends, and I don’t see any breakdown. Maybe she’s this strong, but her strength takes away from the strength of the ending.

After the big reveal, Shea and her mother try to find a way out of the situation. Shea doesn’t want to be bread, but when it finally occurs, she chooses to accept it to protect her family. She chooses, but when the time comes, she refuses to let it happen. She fights, gets sedated, and then gets brutally raped, beaten, and burned while unconscious. We see the process only in her nightmares, but they persist for quite a while. Her body heals for quite a while. She’s hurting physically and mentally for quite a while. And her pain is very strong and graphic. This is definitely one of the many highlights of the book. Shea doesn’t heal instantly, doesn’t regain her strength quickly. But the hatred that was planted into her pushes her forward, alongside a strong desire to survive and save her family.

And save them she does. Not all of them. Once again, the book masterfully creates obstacles for her. Shea has to use her brain, her equipment, her ally, and her strength to get what she wants. She breaks her ankle, receives a bullet wound, carves out an implant from her body with a knife. Pained, bloodied, and tired, she manages to prevail. As I said, the final showdown is done extremely well. I never knew who was going to die, what was going to happen next or even how was Shea supposed to manage.

If the book had ended more or less after the climax, I would give it 5/5. But it doesn’t. I’ve already explained why the ending doesn’t work for me. Maybe you’ll think differently.

In conclusion, the book is beautiful. It gave me much more than I was expecting or thought I needed. The characters are good, so is the story. The struggle is real, the darkness is complete, the blood is warm and sticky, the love is strong and passionate. The ending is the only thing that’s lacking. Maybe I shall just skip it when I re-read the book.